Like many an art fiend, I am a huge fan of J.M.W. Turner. I recently had the pleasure of watching Mike Leigh’s biopic of the artist, and I was impressed.

While J.M.W. Turner would never, and I mean NEVER, win the British art prize awarded in his name, he is still as popular today as he was in his lifetime – maybe more so – and given this, it was about time somebody made a film about him. Enter Mike Leigh.

Mr. Turner, although lengthy, is not a full accounting of the the artists life, but rather, an examination of the last 25 years of his career. Owing to the scope of the project, and the fact that many of his best works were produced later in life, this was probably a wise decision.

This film certainly doesn’t flatter Turner, but to be fair, it doesn’t really flatter anyone else either. The aristocracy, the Royal Academy, and most of all, the critic John Ruskin are all portrayed in a negative light. Not to worry, Turner’s likability, or that of his supporting cast, shouldn’t deter the viewer – many a genius was also a cad.

At times quite beautiful, the Oscar nod for best cinematography is well deserved, as are the nods for costume design and music (original score). That said, of all the films best qualities, the performance of Timothy Spall is by far the greatest. Sadly, he did not receive a nomination.

There isn’t much to complain about here. If you’re a fan of Turner, or just great film making, you’ll want to see this.

It’s that time of year again. Time to regroup. Time to reflect. And most importantly, time to set goals. Here then, are my plans for the upcoming year.

Every artist should have a list of goals. Here are some of mine:

Of all my influences (and there are many), Joseph Cornell is by far the biggest. Here then is a short bio of the man and his work.

Joseph Cornell was born in Nyack, New York on December 24, 1903 to Joseph, a textile merchant, and Helen, a kindergarten teacher.

The eldest of four siblings, he was a shy child who played in isolation, and was wary of strangers. The Death of his father in 1917 (when he was 14) amplified his shyness.

It also brought hard times upon the family, and they were forced to move to a smaller house in Queens. With the exception of 2 years away at school (he didn’t graduate), Cornell spent almost his entire life in that house.

A deeply religious man, he was either incapable, or unwilling to enter into a romantic relationship, so instead, he spent his adult days in the company of his mother, and brother Robert (who had cerebral palsy). He did sometimes enjoy the friendship of women, but they found him far too weird to date.

Cornell is best known for his boxed assemblages, which he created using found objects. These works have several themes, chiefly among them: Medici children, birds, ballet dancers, and female film-stars.

While he never pledged allegiance to any one ‘ism’, he is most often considered a surrealist, and owing to that, he became friends with some of the movements biggest players. Later in life, his influence could be seen in other movements, such as Pop.

One of the best things about living in a big city is the art. With that said, if you’re in Toronto this month (and next), the following shows will likely be stellar.

The Bad News: If you’ve ever been to Toronto, you know it can get really, really cold in January/February.

The Good News: There is a lot of great art to look at.

Stay warm, and go to the following shows:

Seems like Coupland will be all over the city this winter. Maybe I’ll read another one of his books before I go.

This guy can paint, and his piece in the Art Gallery of Ontario is outstanding. Here’s hoping he brings his ‘A’ game.

Probably the biggest exhibition to hit the city this year. Of all the shows in 2015, I’m looking forward to this one the most.

From appropriation to plagiarism, and art selfies to art vandalism, 2014 was a busy year. Here are some of the art world’s highs and lows – mostly lows. 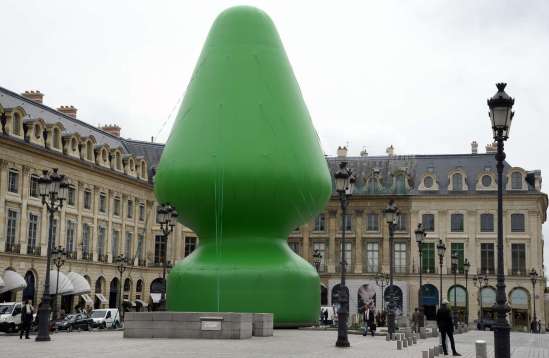 ABOVE: Paul McCarthy, Tree, 2014, sculpture, installed at the Place Vendôme in Paris

ABOVE: Brett Bailey, Exhibit B (Human Zoo), 2014, performance at the Barbican Centre in London.

Kara Walker’s Sugar Baby was arguably the most talked about – and praised –  artwork of 2014. The accolades are well deserved.

In October, Paul McCarthy installed Tree (a giant green butt plug) at the Place Vendôme in Paris. While that in itself is more funny than bad, some ass-hats took it upon themselves to attack the artist, and then the artwork. Not cool.

Brett Bailey’s Exhibit B (Human Zoo) caused a shitstorm everywhere it went last year. The threat of ‘extreme’ protests finally forced the Barbican Centre to cancel the show in September.