In the past, I’ve written about artists the public loves to hate. Today, I’m going to write about two the critics can’t stand – Jack Vettriano and Thomas Kinkade. 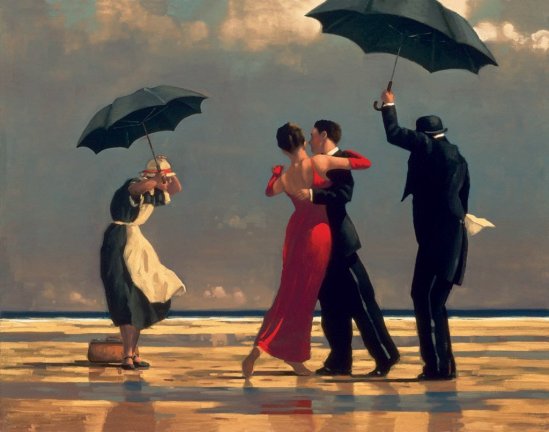 Born in Scotland, Jack Vettriano was raised in poverty and dropped out of school at 16 to work as a coal miner. He began painting at 21 and applied for art school at 36, but was rejected. His first success as an artist came in 1989 after two of his paintings were accepted and sold in the Royal Scottish Academy annual show. Since then, his work has consistently sold in the six figures, and reproductions alone have made him a millionaire. He claims not to care what the critic’s think, which is good, because they don’t like him very much.

“Vettriano is not even an artist. He just happens to be popular, with “ordinary people” who buy reproductions of his pseudo-1930s scenes of high-heeled women and monkey-suited men, and celebrities who fork out for the originals of these toneless, textureless, brainless slick corpses of paintings. I urge you to visit the National Gallery. Look at great paintings for a few hours. Now take a look at Vettriano.” Jonathan Jones, UK Guardian

“In a work like The Singing Butler the information hangs on the surface. There is little joy in the handling. You sense teeth gritted in the execution. The movement of the paint on canvas does not suggest self-knowledge or skill or the embracing or abandonment of history – in other words, the authorship on which the best painting depends.” Moira Jeffrey, The Scottsman 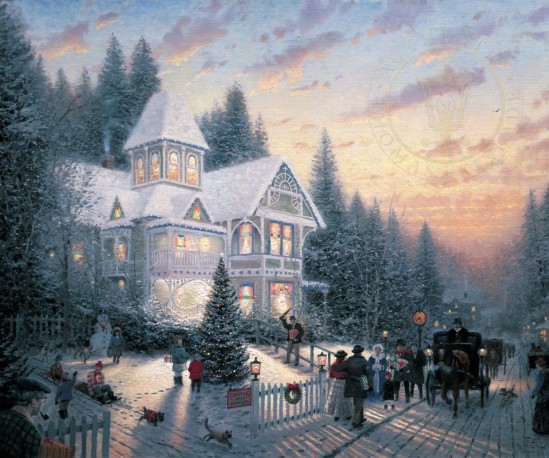 Born and raised in California, Thomas Kinkade received formal training at the Art Center College of Design in Pasadena and began selling his work through galleries in the early 1980’s. He later founded the Thomas Kinkade Company and began selling originals and reproductions through mail order and dedicated retail outlets. While this made him extremely wealthy, critical success proved allusive, and in 2012, he passed away from alcohol poisoning at the age of 54.

“Kinkade’s products have a consistent message: that if we want the feeling of living in a conflict-free world, we can buy it. The cost — as distinct from the price — of this feeling is mere denial of all one’s experience of citizenship, of human relations, of historical awareness.” Kenneth Baker, San Fransico Chronicle

“Kinkade calls himself the most controversial artist in the world, and arguably, he is both the most loved and hated painter alive. To his millions of adoring fans, he represents the triumph of populism and wholesome family values over elitism and intellectual snobbery, the victory of the heart over the mind. To his detractors, he represents the triumph of sub-mediocrity and the commercialization and homogenization of painting. (I can’t bring myself to describe what Kinkade does as “art.”) Kinkade is far from the first painter to mix commerce and creativity; Salvador Dalí, for example, wasn’t shy about self-promotion, or pimping his services to the highest bidder. But perhaps no other painter has been as shameless or as successful at transforming himself into a corporation as Kinkade. Kinkade’s detractors also dislike him because his work is fucking terrible, a maudlin, sickeningly sentimental vision of a world where everything is as soothing as a warm cup of hot chocolate with marshmallows on a cold December day.” Nathan Rabin, the A.V. Club