Most public art gets lost in the environment, but every so often, one leaves an impression. Case in point, The Merchant Mariner Monument in Sydney, Nova Scotia. 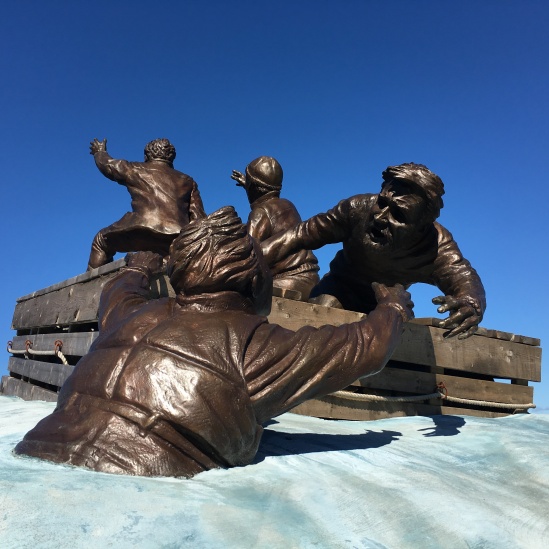 Unveiled in 2016, the Merchant Mariner Monument is a great addition to the waterfront of Sydney, Nova Scotia, and an impactful memorial to the 12,000 men and women who served in Canada’s Merchant Navy during WWII.

Set against the harbor, the sculpture blends well with its environment, and does a good job of conveying the dangers of serving your country – even as a civilian. One in seven merchant mariners lost their lives during the war, but, if you were left stranded like the sailors above, your chances of survival were much less than that. Looking at the sculpture and realizing the men in it were likely doomed, really hits home. Some of Canada’s biggest sacrifices occurred off the battlefield.

Although they suffered a casualty rate greater than the Canadian Navy, Army or Air Force, veterans of the Merchant Marine were denied benefits and official recognition until the 1990’s; memorials like this came even later. Fortunately, their sacrifices are now being recognized. If you’re ever in the Sydney area, you should pay a visit.